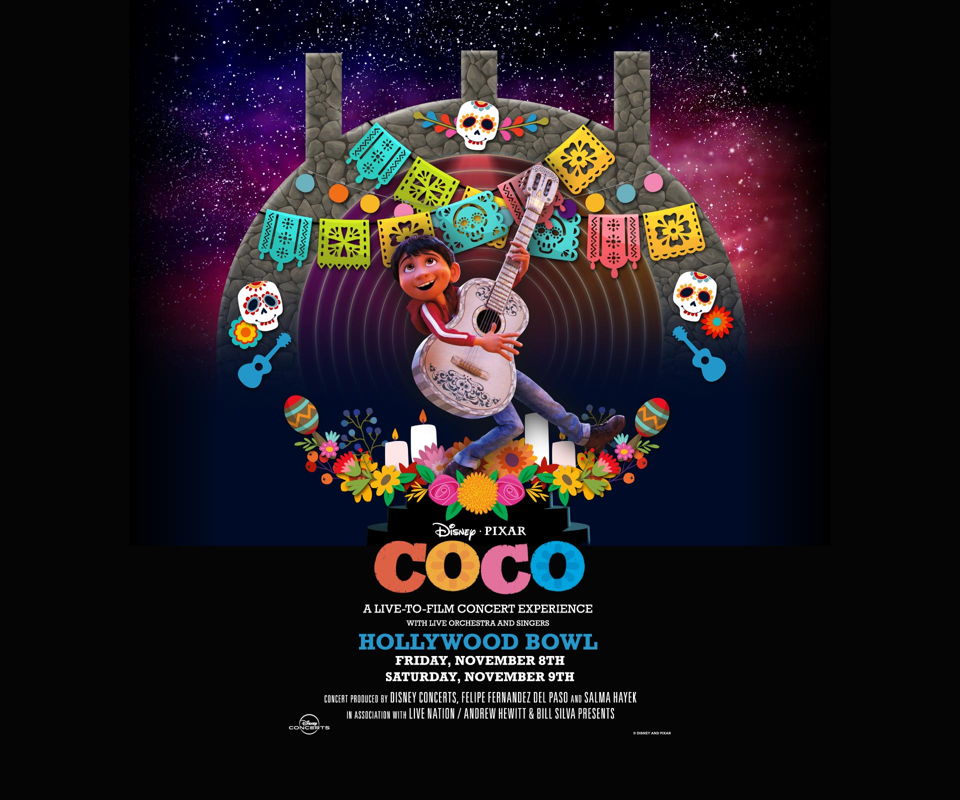 To Celebrate Diá de los Muertos, the Beloved Oscar®-winning Disney and Pixar Film is Reimagined at the Legendary Hollywood Bowl. Amazing Live-to-Film Concert Experience will Feature Live Orchestra and Digital Projection on the Shell of the Historic Venue

Disney and Pixar’s Coco will be brought to life on stage for the first time ever this November at the Hollywood Bowl for one weekend only – Friday, November 8th and Saturday, November 9th. The spectacular event in Los Angeles will include an all-star lineup of special guests including Benjamin Bratt, Eva Longoria, Carlos Rivera, Miguel, Alanna Ubach, Alex Gonzalez, Jaime Camil, Lele Pons, Rudy Mancuso and Natalia Jimenez whowill appear throughout the evening as the beloved film plays on the Bowl’s movie screen accompanied by a full, live orchestra. Mariachi Divas will also entertain the audience with traditional Mariachi music throughout the night. Tickets will go on sale to the general public beginning Friday, September 13that 12pm PT at Ticketmaster.com.

Coco Live in Concert at the Hollywood Bowl will transform the legendary venue into the Land of the Dead with special pre-show activities. Day of the Dead costumes are encouraged.

Mousetrappe, the award-winning immersive design agency and media studio, returns to create state-of-the-art digital projection imagery on the shell of the iconic Hollywood Bowl.   Earlier this year, Mousetrappe also created imagery for Disney's The Little Mermaid Live in Concert at the Hollywood Bowl.

“I’m very excited to join this incredible group of exceptional talent, in the city that I’m from, to bring this very special movie and message to life,” said Miguel. “The idea of celebrating our ancestors is very dear to my heart, especially after the passing of my grandparents.”

“It is such an honor to be a part of this monumental celebration at the Bowl,” said Alanna Ubach. “Love to my beautiful family and friends watching!”

“Coco is my heart, it means everything to me. It’s ancestors, family, music, love, culture, traditions, dreams, and passion. Coco is everything that inspires, connects, and makes the world a better place. It’s a unique film,” said Alex Gonzalez. “The Hollywood Bowl is a very special place where we can celebrate and share our love and appreciation for music and Coco! It’s a huge honor and privilege to be a part of this beautiful performance at the Hollywood Bowl. I am so excited, can’t wait!”

Felipe Fernandez del Paso serves as director ofCoco Live in Concert.  Fernandez del Paso has directed theater and film, and is also a production designer, set designer and writer.  He received an Oscar® nomination for Best Production Design for the 2003 film, “Frida.”

Amy Tinkham is Creative  Consulant for Coco Live in Concert.  Most recently she served as Creative Director for  Aerosmith’s “Deuces are Wild” Las Vegas residency and James Taylor’s Caesars Palace residency.  She also directs the Dancing with the Stars and America’s Got Talent Live tours.  She is currently working with Franco Dragone on a new show in China.

The concert is produced by Disney Concerts andLive Nation/Andrew Hewitt & Bill Silva Presents, a team who has performed together several highly acclaimed live to film events at the Hollywood Bowl including Disney's Beauty and the Beast in Concert starring Zooey Deschanel and Kelsey Grammer as well as Disney's The Little Mermaid starring Lea Michele and Harvey Fierstein.